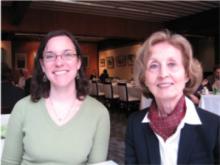 Heather Short, a doctoral student in the Department of Scandinavian Studies, was awarded the prize for the Nadia Christensen Endowment for Excellence in Nordic Studies for 2011-2012. The award was made in recognition of Ms. Short’s outstanding academic performance and scholarly promise as judged by the department faculty.

Heather’s research centers on the connection between tradition and identity, and specifically how traditions inform and shape identity in contemporary society. Her current research is focused on two Norwegian clothing traditions: the folk-costume (bunad) and hand-knit clothing. The bunad is heavily steeped in tradition and a high degree of authenticity must be established for a variant to be recognized. While the folk costume is a piece of Norwegian nostalgia, it continues to be popular and worn by large numbers of people during 17. mai festivities, at Christmas, and other special occasions. Knitting patterns, on the other hand, while also traditional in nature, are not constrained by the same stringent claims of authenticity which characterizes the bunad tradition. Both types of clothing, however, continue to function as markers of Norwegian identity in contemporary society. In addition to the original, traditional patterns, both the bunad and knitting motifs have been used as inspiration for designers and continue to undergo processes of reinterpretation and evolution. Heather’s dissertation research will investigate the historical development of these two traditions, and explore their significance today by engaging with the discourses of identity in Norway as well as present results of field work among the crafts-people who are involved with both traditions.

The Nadia Christensen Endowment for Excellence in Nordic Studies was established through a generous gift from the Hognander Family Foundation of Minneapolis, Minnesota, in honor of Dr. Nadia Christensen, a doctoral graduate in Comparative Literature with an emphasis on Scandinavian languages and literature at the University of Washington. The purpose of the endowment is to recognize and reward outstanding academic performance and/or scholarship by an advanced graduate student in the Department of Scandinavian Studies.