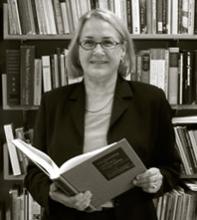 A popular teacher, Gavel Adams joined the faculty in 1991. She has published two well-received critical textual editions of Strindberg’s Inferno and Legender in the Swedish National Edition of Strindberg’s Collected Works. She is also the editor of a Dictionary of Literary Biography edition of Twentieth Century Swedish Writers, the author of several scholarly articles and reviews, and a passionate advocate for Swedish studies in North America.