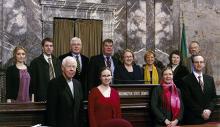 On March 11, the Washington State Senate unanimously passed Senate Resolution 8643 to “honor the Department of Scandinavian Studies on its 100th anniversary for continuing to preserve and cultivate the Scandinavian and Baltic cultures not only in the state of Washington, but the entire United States of America.”

The resolution, sponsored by Senators Ken Jacobsen, Mary Margaret Haugen, Jeanne Kohl-Welles, and Karen Fraser, was passed on the centennial anniversary of the initial legislative bill which established the Department in 1909. Since then, the Department has grown to include 12 full-time faculty, 80 undergraduate majors and 20 graduate students.