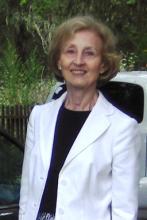 The Department of Scandinavian Studies at the University of Washington is pleased to announce the establishment of the Nadia Christensen Endowment for Excellence in Nordic Studies to “recognize and reward outstanding academic performance and or scholarship by an advanced graduate student” who will be designated as a “Nadia Christensen Scholar.”

Created through a gift by the Hognander Foundation of Minneapolis, Minnesota, the endowment honors Dr. Nadia Christensen for her substantial contributions promoting a greater understanding of and appreciation for Nordic cultures. Christensen received her Ph.D. in 1972, and went on to become one of the foremost translators of Scandinavian literature. By establishing this award, the Hognander Foundation wishes to recognize and encourage students who, like Christensen, demonstrate excellence in Nordic studies.

Born in Minneapolis to parents of Norwegian and Danish descent, Christensen grew up in a home where the family’s Nordic heritage was deeply valued. She graduated magna cum laude from Augsburg College in 1959 and went on to earn graduate degrees in comparative literature at the University of Minnesota (MA, 1964) and the University of Washington (Ph.D., 1972) where she specialized in Scandinavian Languages and Literature. In the early years of her professional career, Dr. Christensen taught in Scandinavian departments at the University of Minnesota, the University of Washington, and Pacific Lutheran University. Later she served as the director of publications for the American-Scandinavian Foundation in New York and Editor-in-Chief of Scandinavian Review. While there, she established the ASF Translation Prize, the first annual award in the United States for English translations of Nordic literature. Christensen has published approximately 400 translations of fiction, poetry and drama, of which 19 are book-length works, including two winners of the prestigious Pegasus Prize. In 1996, His Majesty King Harald V of Norway awarded her the Knight’s Cross, First Class, of the Royal Norwegian Order of Merit in honor of her work as translator and dedication to furthering relations between the United States and Norway.

The first Award from the Nadia Christensen Endowment for Excellence in Nordic Studies will be made by the Department of Scandinavian Studies in June, 2011.