Barbro Osher Endowed Professorship in Swedish Studies infused with an additional most generous gift of $250,000 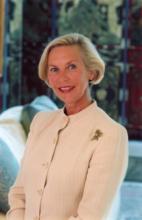 In 2011, the Foundation donated an additional $250,000 into the existing endowment, thereby further strengthening and fortifying Swedish studies at the University of Washington. Barbro Osher, Consul General of Sweden in San Francisco, has been called the “Ambassador of Swedishness.” What inspires this passionate benefactor of Swedish Studies? According to Barbro Osher: “I feel that Scandinavia, on the whole, stands for social awareness and responsibility towards others both locally and globally. We exercise vision and long-term solutions in society and have, despite our small size, been at the forefront in social sciences as well as scientific research. We have well-defined policies to deal with issues such as global warming and sustainable development. Thus, Scandinavian Departments do not only stand for the study of languages and literature, they stand for developing vision, reason and responsible attitudes on a global scale.”