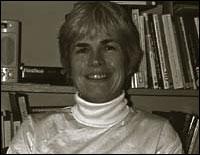 Patricia L. Conroy, Associate Professor Emerita, passed away peacefully on Sunday, March 4, surrounded by close friends and family. She was 70 years old. Born in 1941 in Dayton, Ohio, Pat was raised in New Jersey. Intending to study medicine, she enrolled at Rutgers University where she was introduced to Icelandic literature. Following graduation in 1963, she took her small savings and bought a ticket to Reykjavik. There she found a job as a laboratory technologist and spent her spare time studying Modern and Old Icelandic languages, Icelandic literature, phonetics and semantics. In the summer of 1965, Pat studied Danish at the Folk High School in Rødding, Southern Jutland, before spending the academic year at the University of Copenhagen.

In 1966 she was admitted to the graduate school in Scandinavian studies at the University of California, Berkeley. She earned the M.A. degree in Danish linguistics in 1968 and, following a summer in the Faroe Islands, she began work on her Ph.D. focusing on Faroese ballads. Before completing her dissertation, Conroy accepted a position at the University of Washington as Acting Assistant Professor in 1972. With the completion of her dissertation in 1974, “Faroese Ballads and Oral-Formulaic Composition,” she was promoted to Assistant Professor. Subsequently promoted to Associate Professor in 1980, Conroy taught courses ranging from medieval literature and Scandinavian mythology to linguistics and Hans Christian Andersen. In 1977 she edited Ballads and Ballad Research, an anthology of selected papers from the International Conference on Nordic and Anglo-American Ballad Research. With her colleague Sven H. Rossel, she co-edited Tales and Stories by Hans Christian Andersen (1980) and The Diaries of Hans Christian Andersen (1990), both published by the University of Washington Press. She had been working on a study of the ballad tradition of the Faroe Islands at the time of her death.

Professor Conroy was an active member of the Society for the Advancement of Scandinavian Study, the International Congress on Medieval Studies and the Modern Language Association. She was a dedicated teacher and devoted mentor to her students and a valued colleague to the other members of the faculty.