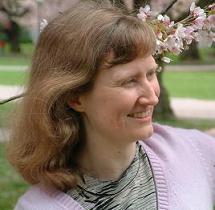 Melissa Lucas, a doctoral student in Scandinavian Literature and Danish has been appointed Nadia Christensen Scholar in Nordic Studies for 2012-2013.  The award is made to a graduate student in recognition of outstanding academic performance and scholarly promise as judged by the department faculty.
Melissa was raised in Michigan and attended Mount Holyoke College in Massachusetts where she majored in German. With a strong desire to learn more languages, she spent her junior year abroad in Denmark with the Scandinavian Seminar program. Subsequently, she earned and MA in Speech Pathology from the University of Washington and a second MA from the University of North Carolina in Linguistics. She returned to the UW to pursue a Ph.D. focusing on Danish and literary studies and also served as a Teaching Assistant in Danish.
Melissa's dissertation research will investigate Scandinavian works from the emerging field of "electronic literature.  Such works share some narrative and poetic similarities with the codex, or printed book, but also diverges from the traditional book form by making use of computer capabilities absent from paper and ink creations.  Melissa will be woking with faculty at the Universities of Bergen and Copenhagen to examinie how best to approach electronic works from a critical standpoint.  Her dissertation, tentatively titled "LitARTure: Close Readings of Electronic Literature from Scandinavia," will draw on strong traditions of literary criticism in Scandinavian studies, while simultaneously attempting to expand the methods used by critics.  Electronic literature criticism will demand skills not currently considered germane to critical writing, in particular, aspects of text-image analysis. Melissa plans to draw connections and inspiration from the field of graphic novels, works which also bring text and image together in symbiotic relationship.
The Nadia Christensen Endowment of Excellence in Nordic Studies wa established in 2010 through a generous gift from the Hognander Family Foundation of Minneapolis, Minnesota, in honor of Dr. Nadia Christensen, a doctoral graduate in Comparative Literature with an emphasis on Scandinavian languages and literature at the University of Washington. The purpose of the endowment is to recognize and reward outstanding academic performance and scholarship by an advanced graduate student in the Department of Scandinavian Studies.