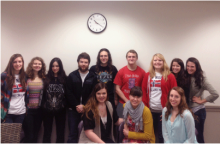 The Norwegian American Weekly is the only Norwegian-American newspaper in existence, and it has been published continuously since 1889. The Weekly is the continuation of over 500 Norwegian newspapers which have existed in America, including Western Viking of Seattle, Wash. and Norway Times of New York, and is published every Friday.

The five articles are as follows:

So, why are you studying Norwegian?

Lean Norwegian from your phone!