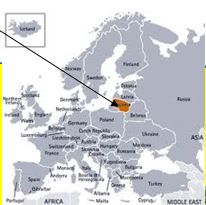 The Department of Scandinavian Studies is proud to announce that it is offering a new class this spring quarter:

You can receiver VLPA credit for this course.

*Although listed as a 400 level class, this is a 100 level course open to all students. In the future this course will be listed as SCAND 153.

Below are some topics to be discussed during this course:

Lithuania is the country of the oldest living Indo-European Language and the largest state in Europe in the 15th Century.

Lithuania was the last pagan state in Europe but the first of 15 Soviet Republics to declare independence in 1990.

Lithuania is the country of the first monument to American singer and musician Frank Zappa.