Danish Modern Design Comes to the Nordic Heritage Museum in May 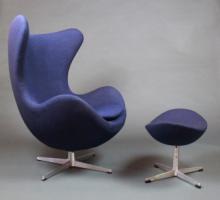 The Nordic Heritage Museum will go “Mad Men” this May with the eye-catching and interactive exhibition Danish Modern: Design for Living. On view from May 16 through August 31, the exhibit will highlight the unique furnishing designed and made in Denmark during the 1950s and 1960s.

Dozens of vintage pieces from the period will be on display by designers such as Paoul Henningsen, Arne Jacobsen, Niels Otto Møller, Borge Mogensen, and Hans Wegner. Wegner will be featured with his most popular designs including the Round Chair, later known simply as “the Chair” after it gained wide popularity in televised presidential debates between John F. Kennedy and Richard Nixon.

"Yes, you may even sit in some of the chairs! You can see for yourself how a successful balance of form and function has kept these chairs in production for over 50 years,” says Lizette Gradén, chief curator at the Nordic Heritage Museum.

In addition to furniture, table settings, light fixtures, home electronics, toys, and jewelry will be included in the exhibition, as well as examples of advertisements and marketing campaigns that helped introduce Danish design to American consumers. Visitors can also listen to six contemporary Danish designers describe their work in relation to the question “What makes design Danish?”

“Perhaps because of the Scandinavian impact on the Pacific Northwest, Seattle was particularly susceptible to the market of Danish Modern Design, evident through the Scan|Design store in downtown Bellevue in 1964, (later expanded into Scan|Design Furniture, Inc.) and other companies who helped furnish the many midcentury homes on the West Coast,” says Gradén. Danish Modern: Design for Living was organized by The Museum of Danish America, Elk Horn, Iowa.

Exhibition–Related Programs at the Museum

Danish Modern: Design in Theory, a lecture by Mark Mussari: Thursday, May 15, 4:00 pm

PechaKucha Night Seattle returns to the Museum, this time focusing on Scandinavian Design, inspired by the Danish Modern exhibit now on view. First formed in Tokyo in 2003, this 20x20 format features simple presentations of 20 images shown for 20 seconds accompanying presenters’ talks. These informal and fun gatherings have since spread around the world.

Stay tuned to the Nordic Heritage Museum website at www.nordicmuseum.org as more events are announced for the run of the exhibition.