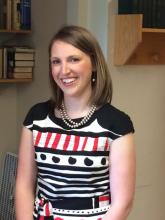 Maren Anderson Johnson successfully defended her Ph.D. dissertation “Staging Genius: Henrik Ibsen and Biographical Theater” on  May 29th, 2014. The dissertation argues that recent Norwegian dramas by Robert Ferguson, Jon Fosse, and Niels Fredrik Dahl have shifted the discussion around Ibsen’s authorship and altered perceptions of Ibsen’s status as a genius. The plays stress the ways in which women played a necessary, complicated, and overlooked role in Ibsen’s writing process, challenging the stereotype of the autonomous genius working in isolation. The dissertation calls attention to the significance of biographical theater and fiction in reshaping readers’ ideas of canonical literary figures, such as Ibsen. Professor Andrew Nestingen served as Anderson-Johnson’s adviser. She completed the dissertation at the Ibsen Center in Oslo, where she was in residence as the department’s Kielland-Løvdal fellow in Norwegian studies during 2013-14. Maren Anderson-Johnson begins an appointment as Assistant Professor of Norwegian at Luther College, Decorah, IA, in Autumn 2014.

On October 8th, Kirstine Kastbjerg successfully completed the defense of her doctoral dissertation, “Reading the Surface: The Danish Gothic of B.S. Ingemann, H.C. Andersen, Karen Blixen and Beyond.” Supervised by Professor Marianne Stecher, the dissertation examines the negotiation of Gothic tropes by Danish authors with a particular emphasis on the excessive foregrounding of surfaces in the Gothic. Relying on excess, spectacle, hyperbole, clichéd conventions, stylistic ornamentation and histrionic performances for its effect, the Gothic counter-narrative questions not only good taste, but the distinction between popular entertainment and academic validity, and so it clashes dramatically with the construction of Danish literary history, and the Danish discourses of realism and “Dannelse.” The dissertation argues that there is a distinct but neglected Gothic tradition in Danish literature, from the early 1800s to the present day, from Ingemann, Andersen and Blixen (Dinesen) to Peter Høeg and L.C. Skov.

Ralitsa Lazarova defended her dissertation “True stories: The Politics of Emotion in Works of Performative Realism in Recent Swedish Fiction," on May 28, 2014. Lazarova’s dissertation analyzed works of contemporary Swedish fiction by authors Per Olov Enquist, Sara Stridsberg, and Jonas Hassen Khemiri, which make prominent use of the aesthetic strategies of performative realism. These works focus thematically on extreme and marginalized figures such as the monster, the hysteric, the angry feminist, the murderous mother, and the international terrorist. Lazarova’s analysis demonstrated that strong, negative emotions such as abjection, anger, horror and geopolitical fear are employed to foreground relationality and vulnerability. In that sense they address and speak critically of the intense transformation, which Sweden is undergoing, linked primarily to the changing role of the welfare state, multiculturalism, and globalization. Professor Lotta Gavel Adams was the chair of Lazarova’s PhD committee and the main advisor for the dissertation.

On February 27th, Melissa M. Lucas successfully completed the oral defense of her doctoral dissertation, "Digital Literary Arts -- Scandinavian E-Texts: Criticism, Theory, and Practice." The dissertation, supervised by Professor Marianne Stecher, explores Scandinavian Electronic Literature, which has emerged as a distinct digital and multi-modal literary art since the late 1980s.  An emerging trend in literature world-wide for the past quarter century, Melissa Lucas' dissertation investigates the theoretical discourses around "E-Lit" as well as specific Scandinavian E-Lit works, E-lit criticism, as well as Nordic institutions for the study of E-lit.   The dissertation argues that Scandinavian Electronic Literature occupies a significant and distinct position in this relatively new field in the broader context of the Digital Humanities.

Congratulations to Liina-Ly Roos, who in spring 2014 passed her final examination to earn the Master of Arts degree in Scandinavian Languages and Literature. Her MA thesis, “Post-Soviet Identity in Nordic Fiction: Trauma of Occupation and Sex Trafficking in Sofi Oksanen’s Purge and Lukas Moodysson’s Lilya 4-ever,” analyzed a recent Swedish film and a Finnish novel, both of them set in Estonia, that elicited much controversy in northern Europe. Both works and present narratives of sexual trauma and failed therapy. “Fiction becomes personal,” writes Roos, ”It allows the audience to become part of a life and has an impact on them in different ways.” For Estonian readers or viewers, these works may offer therapy when they confront their nation’s tragic, traumatic past.

Professor Marianne Stecher and recent graduate students, Melissa Lucas and Maren Johnson, have all contributed articles for a new work on Hans Christian Andersen "a seminal figure in European and international children’s literature." According to the book's publishers, More Than Just Fairy Tales: New Approaches to the Stories of Hans Christian Andersen "takes an innovative look at the classic tales of Hans Christian Andersen. Rather than viewing the stories as purely self-contained units or simplistic narratives for children, the essays in this volume employ critical reading strategies and literary theory to explore thematic connections between the tales and thereby illustrate meaningful patterns in Andersen’s oeuvre."

Follow the link below to learn more about the book and how you can purchase it.
https://titles.cognella.com/more-than-just-fairy-tales-9781626610187.html