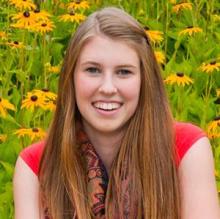 The Department of Scandinavian Studies proudly announces that Elena Donaldson has been awarded the Dean’s Medal 2017 in the Humanities.  Elena is a triple major in Swedish, Sociology and Communication, including a minor in Diversity. She has completed this feat within the regular four-year undergraduate period and with a GPA of 3.98.  Elena is a Phi Beta Kappa and also was invited into Alpha Kappa Delta—an international sociology honors organization. She also devoted time to studies at the Uppsala International Summer Session during the summer of 2015.

Elena’s written exams have proven her deeply rooted interest in humanitarian causes.  For example, in one paper she compared the prison systems in Sweden and the US and she concluded that while the Swedish system aimed at rehabilitation, the US one rather focused on punishment.  In her senior essay she focused on sexual education and again compared the Swedish situation with mandatory education since 1955 with the current indecisive situation in the US.

Elena has many options available for the near future, at the moment she is considering further studies in Diversity and Inclusion or maybe working for Planned Parenthood while she makes her final decisions.  We wish her all the best for the future.