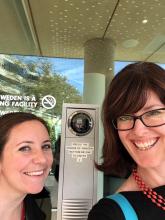 Amanda Doxtater(r) and colleague Elizabeth Howard in Washington DC at the House of Sweden, Oct 2017

October 27-28, 2017 – The Association of Swedish Teachers and Researchers of North America (ASTRA) held its annual symposium and meeting in Washington, D.C. at Sweden House. ASTRA is a non-profit organization for North American researchers and teachers involved in Swedish language, linguistics, literature, culture, and area studies. Members promote the study of Swedish, Sweden, and other Swedish speaking contexts at all levels, and work to facilitate student mobility and academic cooperation between scholars engaged in these fields. Our annual symposium, generously funded by the Swedish Institute and the Swedish Embassy, provides a springboard these international collaborations. I am honored to serve as ASTRA’s current president.

The theme of our symposium this year, “Selma Lagerlöf’s World,” brought together a wide variety of scholars and practitioners working on one of Sweden's most beloved authors. In 1909, Lagerlöf was both the first Swede and the first woman to win the Nobel Prize for Literature. In 1914, she would be the first female member of the Swedish Academy. Anna Nordlund from the University of Uppsala presented on Selma Lagerlöf’s influence on Swedish cinema as we know it today; Sofia Vijkmark from the University of Karlstad illuminated Gothic impulses in Lagerlöfs oeuvre; theater director Leif Stinnerbom shared his insight transforming Lagerlöf’s novels into gorgeous theater pieces at Västanå Theater in southern Sweden; Chip Oscarson presented on a Lagerlöf through the lens of the digital humanities; and Ann Boglind of the University of Göteborg, along with Anna Nordlund, shared an immense body of pedagogical material they have designed and collected on the website: litteraturbanken.se for high school as well as university classrooms. The symposium provided a wealth of inspiration and resources to bring Selma Lagerlöf directly in our courses and research projects.

This year’s symposium was particularly exciting in that it attracted the attention of Swedish National Radio (the equivalent of NPR here in the states). The cultural news program Kulturnytt interviewed me, along with colleagues Susan Brantly and Scott Mellor from the University of Wisconsin, Madison, about our engagement with Lagerlöf. Journalist Kajsa Boglind was particularly interested in hearing how we used Selma Lagerlöf in our courses and whether her work spoke to American college students. Lagerlöf occurs as a central figure in my courses on Nordic Cinema, as a powerful force behind what is now called The Golden Age of Swedish Cinema, from around 1914-1924. Lagerlöf worked hand in hand with directors Victor Sjöström and Mauritz Stiller to adapt many of her novels for the screen and in so doing imbued film with an aura of cultural legitimacy. At the same time, Lagerlöf was a brilliant entrepreneur with a sense for both low and high literary culture; she realized that films would help sell her books to broader audiences. Scott Mellor drew attention to how supernatural and psychological aspects of Lagerlöf’s work, bore a marked resemblance to the contemporary crime fiction and thrillers that are so popular with our students all over the world. And Susan Brantly offered an elegant reading of a scene from En herrgårdssägen that illustrates Lagerlöfs penchant for combining reality and fiction in a way that borders on expressionistic. Talent like Lagerlöf’s, she remarked, will never cease to attract students. You can listen to the interview in Swedish, here (the final three minutes):

Listen to the Interview: http://sverigesradio.se/sida/artikel.aspx?programid=478&artikel=6808206