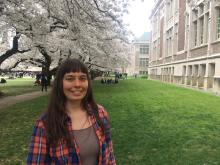 The Society for the Study of Finnish (Kotikielen Seura) has awarded its Outstanding Research Article Prize for 2018 to Finnish Lecturer Hanna-Ilona Härmävaara. Härmävaara has an ongoing research project on mutual intelligibility of Finnish and Estonian and on multilingual interaction between the speakers of these languages. In the awarded article “Official Language Policy as a Factor in Using Receptive Multilingualism Among Members of an Estonian and a Finnish Student Organizations”, Härmävaara studies multilingual language practices by combining data on actual interaction, and survey data on what the participants think about using different languages while talking to each other (the local languages Finnish and Estonian, and English as lingua franca). In her article, Härmävaara concludes that “to support European multilingualism, multilingual language practices should be rooted in the micro level in ways that are meaningful to people”. The same can of course be said about supporting multilingualism in the US. The article was published in a book called Language Policy Beyond the State (Springer).