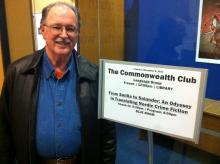 Our dear colleague and friend Steven Murray passed away in late March 2018. Steve and his wife Tiina Nunnally, translators par excellence, affiliates and cherished friends of the UW Department of Scandinavian Studies have enriched and transformed the North American field of Scandinavian literature through their masterful English translations of Danish, Norwegian and Swedish literary classics and crime fiction. Steve will be greatly missed. As a department, we offer our sincere condolences to Tiina and our gratitude for a long and valued friendship with Steven. The following tribute by department alumnus and translator Paul Norlen is published with permission of the Swedish Book Review where it will appear in May 2019:

Tribute to Steven T. Murray (1943–2018)
“If I had to choose one word to describe Steven T. Murray, it would be “versatile.” Steve was best known of course as a distinguished translator, from Danish, German, Norwegian and Swedish. But he was also a publisher (a multi-faceted role in itself, especially for a small literary press), editor and skilled phototypesetter (both extremely fast at the keyboard and with a keen eye for kerning and design). He was a more than passable guitar player too, with a lifelong enthusiasm for blues and rock, and an enormous record collection.
Steve grew up in Oakland, California, with stints in places as disparate as Mexico City and the Philippines as a child. He loved languages and at various times studied German, Arabic, Russian, Dutch, and Spanish. His connection with Scandinavia began during a stay at Krogerup Højskole in 1964, where he learned Danish. Back in the Bay Area, he did technical translation and ran a typesetting business before starting Fjord Press in 1981, with the publication of Love & Solitude: Selected Poems of Edith Södergran 1916–1923 (translated by Stina Katchadourian).
After Steve met his wife, the translator Tiina Nunnally, in 1984, he (and Fjord Press) moved to Seattle. There he rented space for his bulky phototypesetting machine in the city’s Pioneer Square neighborhood. (This was of course before personal computers and word processing.) A personal anecdote: I was also a recent transplant to Seattle at the time, working at a bagel shop nearby. At first, Steve was just a guy who always ordered a pastrami bagel, but one day I noticed he was carrying a book with a Swedish title. I’d been learning the language, and was just starting to try my hand at translation. We struck up a conversation, which then continued for the next thirty-plus years. I'll always be grateful for his encouragement (he engaged me for my first two book-length projects), his friendship, and his sardonic humor.
You might say that Steve caught the wave of Swedish crime fiction early on. His list of translations includes many of the big names: Five books by Henning Mankell (Faceless Killers, 1999); three novels by Karin Alvtegen (Betrayal, 2005); and several by Camilla Läckberg (The Ice Princess, 2008). He also translated numerous suspense novels from both Norwegian and German. The biggest name of all, as it turned out, would be Stieg Larsson, although to start with Steve chose to hide behind a translator’s cloak of invisibility (and the pseudonym “Reg Keeland”). His award-winning translations of the first three books in Larsson’s Millennium series likely represent a high point of Swedish crime fiction for most English-language readers.
But for Steve it wasn’t just about thrillers, although he certainly excelled in that genre. From his two-volume translation of Martin Andersen Nexø’s Pelle the Conqueror (1989 & 1991) from Danish to his masterful rendering of Armand V. by Norwegian novelist Dag Solstad (published in 2018 by New Directions and Harvill), Steve’s achievements, and interests, were wide-ranging. A key part of that was the productive collaboration over the years between Steve and Tiina, a partnership that in sum (nearly 100 books) represents a substantial contribution to Scandinavian literature in English translation.”

This tribute will also appear in Swedish Book Review 2019:1-2