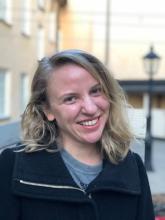 Amanda currently works as a freelance translator in Stockholm. She owns her own company, JA Art and Translation AB, which provides translation, editing, and proofreading services, specializing in tourism, marketing, art and design, and hospitality.

Her father is Swedish and growing up in Washington, she spent every summer at her family’s summer home in Bohuslän, on the west coast of Sweden near Göteborg. She and her husband moved to Stockholm in 2018 after falling in love with the city. While Amanda grew up speaking Swedish, it was her time in the Scandinavian Studies Department that helped her to “speak Swedish well.” Her language skills were “vastly improved” in the Scandinavian Studies program and she has a great appreciation for the linguistic immersion offered in the program. Her improved Swedish abilities and grammar have helped her feel like a truer version of herself as an adult, and have improved her linguistic confidence with friends and family in Sweden. As a double major in English (creative writing) and Swedish, a career in translation made sense as she now translates from Swedish to English.