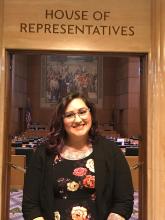 AmyBeth currently works as a legislative assistant for House Speaker Tina Kotek, State of Oregon, and believes that her Scandinavian Studies degree gives her a different perspective on current legislative priorities. After graduating from the Scandinavian Studies Department, she worked in the International Office at Portland Community College, partly due to the fact that she had experience studying abroad at the International Summer School at the University of Oslo during her undergraduate degree. In her current position, her joint degree in Political Science and Scandinavian Studies has provided her with the knowledge she needs about how other countries’ political systems operate and about the gender gap in politics. After seeing first-hand how women in the Oregon Legislature are treated, her future plans include researching how women in the Norwegian political system are treated. In addition, AmyBeth is a counselor at the Sons of Norway Camp Nidaros and uses many of the things she learned in the Scandinavian Studies Department in her work - from teaching Norwegian classes to focusing on Sami people and culture to issues of immigration and politics. Many of AmyBeth’s interests were sparked during her time in the Scandinavian Studies Department - such as learning about women’s role in society in a Post-Vikings History class. She also believes that having a Scandinavian Studies degree has helped her to stand out in job interviews and has been an asset to her career in many ways.