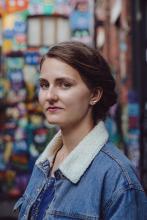 Indigo currently works as a Communicator at the Peace Research Institute in Oslo. After completing her Scandinavian Studies degree, she completed a Masters in Peace and Conflict Studies at the University of Oslo. Indigo’s connection to Norway is an interesting one - her mother was an exchange student for a year in Kristiansand in high school and spent another year in Oslo after completing her undergraduate degree. She still speaks Norwegian and remains in touch with her host family and friends from Norway. While having no Scandinavian heritage, Indigo grew up with a mother who spoke Norwegian, which made a big impression. After taking Norwegian classes in the Scandinavian Studies Department for a year, Indigo enrolled in the Bergen summer school for a month-long intensive course, then moved to Oslo for a year. She returned to UW to complete her degree but had fallen in love with Oslo and could not wait to return, and now considers it her second home. Indigo’s Scandinavian Studies degree has helped her to integrate into Norwegian society not only through language but also through cultural references that she is able to understand based on her studies. Anna Rühl’s way of teaching Norwegian language classes by incorporating Norwegian popular culture was particularly helpful. Indigo’s bachelor thesis on the Sami people of Norway has also led her to more of an interest in the history of the country. Since living in Oslo, Indigo has found that Norwegians are shocked that Scandinavian Studies, based around such a small part of the world, exists in the U.S., but for her “those classes (coupled with my family background) actually probably changed the course of my life.”