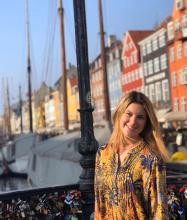 Johanna is currently a psychology student at Lund University in Sweden. While at UW she majored in both psychology and Swedish, and her current program is a combined undergraduate and graduate program that leads to a Masters of Science in Psychology. Her Swedish language skills allow her to tackle a degree in Swedish and to understand how the system works in Sweden. Johanna spent her childhood in Sweden, but gained a deeper understanding of Swedish history, culture, and society in the Scandinavian Studies Department. During her time in the department, Johanna found a “second family,” making friends and connections with people with a shared appreciation for Scandinavian culture. She uses what she learned in the program everyday while living in Sweden, from grammar to understanding the economic system and university traditions. While in the department, she learned to analyze texts based on the time in which they were written, which helps her better relate to Swedes because she has an understanding of important historical and cultural events. This has allowed her to make the transition to living in Sweden as an adult.