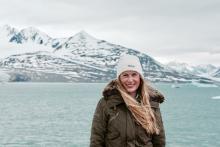 Kristianna is currently a second-year law student at George Washington University Law School in Washington, D.C. During her time in the Scandinavian Studies Department, Kristianna had an incredible Norwegian language teacher - Ph.D. student Maren Anderson Johnson - who she credits for her majoring in Norwegian, studying abroad at the University of Oslo, reconnecting with her Norwegian roots, and falling in love with Norwegian. Professor Andy Nestingen’s Scandinavian Crime Fiction class was also influential in Kristianna’s interest in criminal work and the psychology of why people commit crimes. During her study abroad at the University of Oslo, Kristianna enrolled in classes on the Scandinavian justice system that really piqued her interest in the legal field. This led her to write an article about Norway’s justice system that was published on her law school’s international law blog. She feels that her narrow interest in Norway and Scandinavia has been very helpful as she pursues a career in law. In addition to her published article, she was chosen to be a staff member of her international law review’s 2019 International Guide to Legal Research to focus specifically on the Scandinavian countries. She is also working on a legal research paper on Norway’s regulation of tourists in Svalbard, and was selected to be a research assistant for a Danish professor in her department. Her research on Norway’s handling of national security crises helped her to secure a legal internship with the United Nations Office of Counter-Terrorism in the summer of 2018. She will spend summer 2019 as a Summer Associate at the New York location of Mayer Brown LLP, an international law firm that has a Nordics practice group. Overall, Kristianna feels “that I owe a large part of my professional development and success to the fact that I studied Norwegian and Scandinavian Studies during my undergrad!”