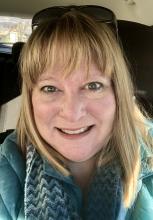 Lauren works as a guidebook map editor for Rick Steves’ Europe. She came to work for Rick Steves after taking a tour of Europe for her thirtieth birthday and becoming friends with the tour guide; they stayed in touch and a couple of years later Lauren began working at the Rick Steves office, first as an office assistant, then in the retail store, and in tour sales, then in catalogs, and finally in the book department where she became a guidebook map editor. Lauren’s job entails fanatical attention to detail - making sure that every word on every map is correct. She credits her attention to detail and ability to focus her thoughts on her studies in the Scandinavian Studies Department. In addition, the breadth of knowledge she learned about art, politics, social democracy, philosophy, cinema, and Scandinavian languages also help her perform the duties of her job. Lauren also attended the International Summer School in Oslo during her time in the Scandinavian Studies Department and lived in the historic part of the University of Oslo campus. She enjoyed meeting people from all over the world, including the historic midwestern colleges with Scandinavian Studies departments. An interesting fact about Lauren’s family is that her maternal grandfather was Norwegian but did not teach his children the language; when Lauren began taking Norwegian classes in the Scandinavian Studies Department at UW, her mother began taking Norwegian classes through the Scandinavian Language Institute as well.