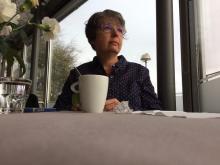 Lola has been working as a freelance literary translator full-time since 2007, after completing a year as a translation intern at FILI Finnish Literature Exchange in Helsinki. In the Department of Scandinavian Studies, Lola studied Finnish language and began translating song lyrics from her favorite Finnish band for fun, discovering her interest in translation; as she loved literature as well, becoming a literary translator became her career. She is also a founding member of the Finnish-English Literary Cooperative. Discovering her love of translation while a student in the department was nurtured by faculty who recommended her for translation jobs, including her first professional job, which turned into her first novel translation. Other important skills gained while a student in Scandinavian Studies include research skills and organizational skills. She also lists her study abroad at the University of Helsinki as a highlight, getting the chance to live in Finland for a year. Lola enjoys visiting Finland regularly and reading Nordic literature.