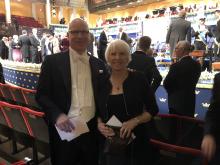 Randall is currently a Professor of Molecular Physiology and Pathology at the University of Cambridge and an associate member of the Department of Cell and Molecular Biology at the Karolinska Institute in Stockholm. He is also a member of the Nobel Assembly at the Karolinska Institute, which chooses the Nobel Prize in Medicine and Physiology. Randall completed two undergraduate degrees at UW, one in Molecular Biology and one in Swedish Language and Literature. While he has pursued a career in science, Randall has put his Swedish to good use, living and working part time in Stockholm, and serving as a member of the Nobel Assembly. He cites the annual Nobel award ceremony as a highlight, and took his mother to the 2017 ceremony (see picture). He feels his degree in Swedish literature has helped him in many ways that are difficult to quantify, but one specific example is his passion for poetry, leading to being awarded the Seatonian Prize for sacred poetry at the University of Cambridge on two separate occasions. He recalls enjoying his classes in the Scandinavian Studies Department, and the inviting and interesting atmosphere of the department. After graduating from UW, Randall went on to a Ph.D. in Genetics at Harvard University, completed his post-doctoral research at UC San Francisco, and taught at UC San Diego before moving to the University of Cambridge. He is the author and co-author of more than three dozen publications; his current research focuses on how the body responds to hypoxia, relevant to a number of diseases, including cancer.