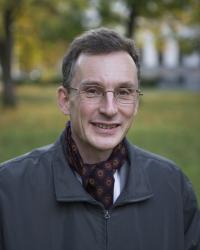 Björn is a professor of Swedish at Uppsala University, and has also been the dean of the Faculty of Languages at Uppsala for the last six years. He will be here on a sabbatical until the end of May.

His main research interest are sociolinguistics and text studies, and he has published books and articles on inter alia Swedish LSP texts, school text books  (especially 19th century ones) and language planning and language policies issues. With respect to the latter, Björn has also been involved in more direct political work: as senior secretary of a parliamentary committee, he was responsible for an extensive draft action program for the Swedish language, which among other things lay the foundation for the present language law in Sweden and the language policy goals that have been adopted by the Swedish parliament.

Björn has also done work on the language situation within the European Union, and at present he is, together with colleagues from the Romance section at Uppsala University, carrying out a research project, ComParE - Comparing Parliaments in Europe, where they contrast the rhetoric of Swedish and French members of the European Parliament.

His main project during the present sabbatical will be a study of a Swedish novel from 1897, Skollärare John Chronschoughs memoarer by August Bondeson. The novel is a satire over the “bad” language used by a social climber in those days, and as such very interesting from a sociolinguistic point of view. When published, it was praised for giving a perfect depiction of “the Swedish written by all those who cannot write Swedish”. Today, however, it is not all that easy to understand what it was that was considered to be so bad about it – in many respect it was people such as John Chronschough who made present day Swedish into what it is today.