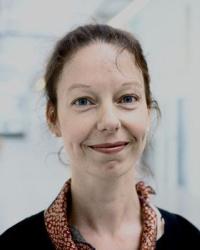 Race and EthnicityFolklore and Mythology

Lizette Gradén is head of collections at Myndigheten Livrustkammaren, Skoklosters slott med stifelsen Hallwylska museet (LSH) in Stockholm and Affiliate Associate Professor in the Department of Scandinavian Studies. In her role as head of collections, Graden provides leadership to the team of curators and conservators who serve all three museums. She is part of LSHs executive team.

Gradén’s research interests include material culture, fieldwork methodology, and Scandinavian American culture. Her most recent publications are the article FashioNorth: Folk costume as Performance of Genealogy and Place in Journal of Folklore Research (2014). For two decades, she has connected academia with museums through conferences, working groups, workshops and by serving on doctoral dissertation committees. Currently she serves on the research committee for central museums in Stockholm, two doctoral dissertation committees, and on the SASS Advisory Board for Area Studies.

Prior to Gradén’s appointment as head of collections at LSH in Stockholm, she served as Chief Curator at the Nordic Heritage Museum. In her position as Chief curator, Graden led the department of Exhibitions, Programs and Collections.

She served on the Museum’ executive team. Graden increased NHMs collaboration with UW, with Scandinavian institutions as well as Scandinavian museums in the US. Scandinavian design was introduced through exhibitions such as Danish Modern and Finland: Designed Environments. Trained as a folklorist, Graden encouraged the sharing of the Nordic American Voices oral history project through publications and other means. The latter efforts rendered the Museum two regional cultural awards in 2013.