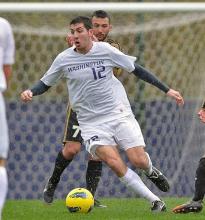 Former UW Soccer Player Chris Brundage has signed a professional soccer contract with Finland's FC Jazz in Pori. Not only is Brundage a talented athlete, but having studied northern Europe with Professor Christine Ingebritsen, he knows a thing or two about Finland and its politics.

Brundage began his collegiate career at Western Washington University before transferring to the University of Washington as a sophomore. Brundage was starting center back his sophomore year (13 of 15 games) and junior year (15 of 18 games). Sitting out most of his senior year due to injury, he returned for the final four games helping the Huskies win a bid to the NCAA tournament.

Brundage's success didn't stop at UW, as he continued on to play for the Seattle Sounder's FC U23 team. The U23 team is part of the United Soccer Leagues' Premier Development League. As part of the Sounder's U23 team Brundage was starting center back leading the team in minutes played and games played. In 2013 Brundage was voted as one of the top four defenders in the entire Western Conference and was named to the USL PDL All-Conference Team representing the Western Conference and Washington State's only player.

Chris Brundage will be joining the FC Jazz for his first game this Sunday, August 11. There's nothing we love more than seeing our Dawgs succeed, but we must admit it's made a little sweeter seeing that success take place in a Nordic country.