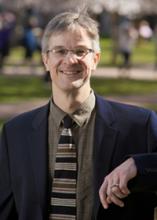 Professor Šmidchens' book, The Power of Song, documents the Baltic nations' successful, nonviolent, resistance to the Soviet Union in the late 1980s and early 1990s. When the Soviet Union began to pressure the Baltic nations, their citizens responded by staging singing protests. “The way nonviolent movements work, every case seems impossible,” Šmidchens says. “This one was no different. But like many others before it, it did work." To learn more about the book or the remarkable story it documents, follow the links below.

Video Interview by the UWashingtonPress

The Power of Song was released in January 2014.