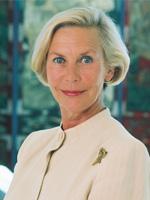 A native of Stockholm, Sweden, Barbro Osher graduated from Stockholm University with a degree in languages and political science. Osher is deeply concerned that Scandinavian Studies Departments are loosing ground at American universities. She feels that Scandinavia stands for social awareness and responsibility towards others both locally and globally. The Nordic countries - despite their small size – have been at the forefront in social sciences as well as scientific research. They have well-defined policies to deal with issues such as global warming and sustainable development. The establishment of an Endowed Chair in Swedish studies speak to Barbro Oshers conviction that Swedish Studies and Scandinavian Departments not only stand for the study of languages and literature, they also stand for developing vision and responsible attitudes on a global scale.

Barbro Osher is Honorary Consul of Sweden in San Francisco. She also serves as the Chair for both the Bernard Osher Foundation and the Barbro Osher ProSuecia Foundation.