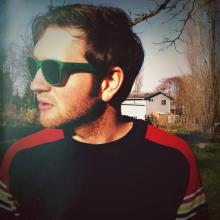 Pétur Valsson, a doctoral student in the Department of Scandinavian Studies, was recognized with the Nadia Christensen Award for Excellence in Nordic Studies in 2014-2015. The award is made in recognition of Mr. Valsson's outstanding academic and scholarly promise as judged by the department faculty.

Pétur Valsson grew up in Reykjavík, Iceland. After completing his BA in History and Film Studies at the University of Iceland, he moved to New York where he earned an MA degree in Film Studies at Columbia University. Wanting to focus his research on Scandinavian cinema, he joined the PhD program at the University of Washington in 2012 in order to broaden his knowledge on Scandinavian culture.

Pétur’s dissertation research is on visual aesthetics in the films of Lars von Trier. Although von Trier is mostly known for his controversial subject matter, he has a peculiar relationship with the medium itself. Through innovative use of the technology inherent to film, he deliberately seeks to destroy the filmic image and defy established cinematic aesthetics. Endlessly seeking to renew his filmmaking, von Trier has been on the front line of innovation in the field and a pioneer in the use of digital technologies. With the emergence of digital media, a number of questions have been raised in film studies about medium specificity and the future of cinema. The dissertation – tentatively entitled “Elevating the Ugly: Lars von Trier’s Anti-Aesthetics and the Filmic Image” – will explore how von Trier challenges the basic properties of the medium, and connect it to current questions about film as well as traditions in Scandinavian art cinema.

The Nadia Christensen Endowment for Excellence in Nordic Studies was established through a generous gift from the Hognander Family Foundation in Minneapolis, Minnesota, in honor of Dr. Nadia Christensen, a doctoral graduate in Comparative Literature with an emphasis on Scandinavian languages and literature from the University of Washington.  The purpose of the endowment is to recognize and reward outstanding academic performance and scholarship by an advanced graduate student in the Department of Scandinavian Studies.