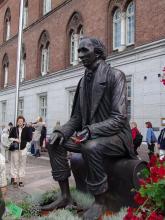 Hans Christian Andersen was made an honorary citizen of his native city, Odense, on 6 December 1867. Now the University of Southern Denmark is celebrating its most famous citizen with an international conference from 5 December to 7 December 2017, exploring the theme “Hans Christian Andersen and Community.” On 6 December the city of Odense will mark the anniversary with a festival of light to celebrate the 150th anniversary of Andersen's honorary citizenship, which led to the entire city being lit up in his honor. UW Professor of Scandinavian Studies, Marianne T. Stecher will be part of the celebration (Odense was her father’s native city) and deliver a keynote lecture at this interdisciplinary conference. Read more about the conference and the speakers here.