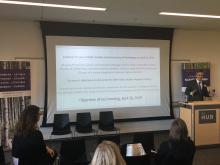 On April 26, to celebrate the 25th anniversary of the Baltic Studies Program in the department, founders, fund-raisers, former and current students and teachers and an array of other supporters joined the festivities for an interesting and stimulating all-day event led by the program head, our own Prof. Guntis  Šmidchens. The Muse of Nordic Sagas was fleetingly seen to be hovering over the proceedings.  Hence:

Eddas both poetic and prosaic-

Epics all, a Baltic frieze.

To see these sagas newly thrive

We must go back twenty-five

Tales of now near ancient lore.

Donors of the crucial dollars

Raišys, Baltic groups and ALA.

Brought to us by Tom DuBois.

Every topic made the rounds

The scope of modern Baltic Studies

Clearly does not notice bounds.

Guard the project as it thrives-

It really does change lives.