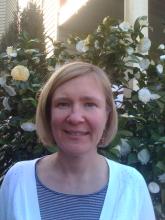 Mia currently works as a freelance literary translator, a career suggested to her by fellow Scandinavian Studies alumna Lola Rogers. After graduating from the Scandinavian Studies Department, Mia first worked in the field of localization and applied her knowledge of Finnish to quality assurance in machine translation and text-to-speech technology software. She then moved to a management position and eventually landed at Microsoft, managing quality assurance for Bing search content in more than 40 markets around the world. Her interdisciplinary degree and knowledge of languages helped her to land the position and to understand the importance of serving up localized content in different markets. After leaving Microsoft and becoming a mother, Mia shifted gears and became a freelance literary translator, translating Finnish literature into English. Her Ph.D. in Scandinavian Studies and broad knowledge of Finnish literature helps her to understand the nuances in different texts and the kinds of intertextual references made by authors. Mia’s mother is Finnish, and through her time in the department she developed a greater appreciation for Scandinavian literature and culture, particularly Finnish literature. One of the highlights of her time in the Scandinavian Studies Department was having the opportunity to share her love of Finnish and Finland with first-year Finnish language students. She is also very appreciative of the financial support she received to travel to Finland for her studies. She has continued this pattern of travel to Finland, participating in programs organized by the Finnish Literature Exchange (FILI) in 2017 and 2018, which provides education to literary translators. With her experience in the tech sector and in literary translation, Mia encourages students to focus on adaptability and to learn how to leverage their skills to open many possible different career paths.