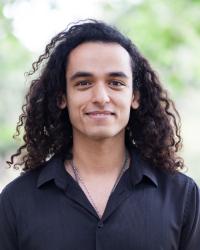 Upon finishing K-12 education in Libya, I redid the last two years of high school on Norway’s west coast in a small town called Flekke, where I completed an International Baccalaureate at United World Colleges Red Cross Nordic. My interest in the history and the culture of Norway was piqued, which led me to pursue a BA at one of Minnesota’s Norwegian influenced educational institutions, St. Olaf College. I majored in Economics, Norwegian and Social Studies Education, with concentrations in Race & Ethnic Studies, and Educational Studies. I also obtained Social Studies teacher licensure. Having had the privilege to be surrounded by knowledgeable teachers and professors, who engaged with me in inconclusive conversations on what it means to be a teacher and how education has been changing and used as a political and economic tool, that led me to have my main research to focus on teacher preparation and education.

My interest lies in deciphering the intention of an education, and the meaning of a teacher. In a world of globalized neoliberalism, the flow of goods and services, and more controversially people, has meant that localities are no longer homogenous, and local happenings are shaped by events happening elsewhere due to globalization. As a result, education has been changing to cater for the global demands of economic development by preparing pupils for the workforce, while focusing mainly on metrics set by global organizations (World Bank, International Monetary Fund, and OECD, just to name a few). This has meant that much of the funding and expectation of education is done through coercive structural adjustments to localities to infuse education worldwide with a vision of the world united by standardized and normative notions of one subjectivity, one humankind, and thus one curriculum. This form of hegemonic cultural erosion done through a neoliberal and neoconservative discourse doesn’t recognize local diversities, but instead it promulgates standardization and sameness in all spheres, and education is not exempt from it. So, my research questions are mainly influenced by comparative political sociology of education with a special focus on the Norwegian context: Teachers as cultural reproducers, how are they trained to not only teach content but also be ready to bring up political conversations in their classroom? How are teachers prepared to instruct culturally, ethnically, and linguistically diverse pupils? How are teachers prepared to grapple with the continuous top-down policy borrowing made by the state? How do teachers organize, mobilize, and unionize to protect their agencies and autonomies?

I am also conducting a side research on Libya’s path dependency, and how its current governance of education is coerced to adopt Washington consensus-like policies, that can be described as neoliberal. This is of interest especially when thinking of the transition from Gaddafi’s pseudo-socialist regime.