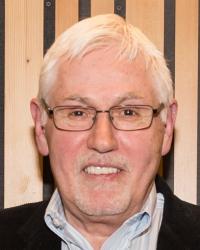 Terje Leiren’s research focuses on Norwegian studies and the cultural history of Scandinavian and Scandinavian America. He is interested in questions of national identity, ethnicity, and cultural expression and has published extensively on the history of the Norwegian-Swedish Union (1814-1905), the establishment of the modern Norwegian monarchy in 1905, Sigurd Ibsen, and Marcus Thrane, a Norwegian radical labor leader and playwright who immigrated to the United States in 1864.  Professor Leiren is the co-author (with Jan Sjåvik) of an updated and revised second edition of the Historical Dictionary of Norway published by Rowman and Littlefield Publishers in 2019.  He is also the author of two books on Marcus Thrane: Marcus Thrane: A Norwegian Radical in America (1987), and Selected Plays of Marcus Thrane (2007).

Professor Leiren served as co-General Editor of the New Directions book series with the University of Washington Press between 2006 and 2015. Eleven books were published in the series during his tenure.  The UW Press New Directions series offers interdisciplinary approaches to the study of the Nordic region of Scandinavia and the Baltic States and their cultural connections in North America.  By redefining the boundaries of Scandinavian studies to include the Baltic States and Scandinavian America, New Directions in Scandinavian Studies presents books that focus on the study of the culture, history, literature, and politics of the Nordic region.  During his time as co-general editor, eleven books appeared in the series.

Professor Leiren has contributed to, and appeared in, television productions for the History Channel, PBS, the A&E Network as well as NRK and TV2 in Norway.