Finland Hot at the University of Washington 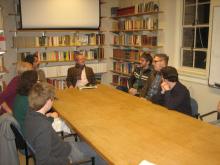 Finland Hot at the University of Washington

Finland is hot at the University of Washington and in Seattle. In November, the whole city was paying attention to Finland. “Finland's Educational Success Story: Less Testing, More Trusting,” read a headline in the Seattle Times. “What Can Washington Learn from the Best Education System in the World,” asked a feature story on Seattle’s most popular radio station.

International education phenom Pasi Sahlberg came to the University of Washington for a two-day visit, where he lectured to hundreds over two days. The UW Finnish program hosted Sahlberg at the UW.

Sahlberg is known for his widely discussed Finnish Lessons: What the World Can Learn from Educational Change in Finland (2011). He is also director general of CIMO, the Centre for International Mobility, in the Finnish Ministry of Education. CIMO and the UW jointly fund a lectureship in Finnish.

Sahlberg said to an overflow crowd of some three hundred at one lecture, “if you want to know Finland, you should learn the Finnish language. It’s not difficult, just different.”

Approximately twenty-five students study Finnish every quarter at the UW, and ten students are working toward a major in Finnish. Hundreds more learn about Finland and its culture and history in English-language courses.

Students of the Finnish language got the chance to meet privately with Sahlberg before one of his lectures, telling him about their studies in CIMO summer courses, and asking him questions about his work. Students at the UW have learned to understand Finland more deeply than even the most educated Americans.

Finnish program supporters also met with Sahlberg at a private reception. These supporters make it possible to bring guests such as Pasi Sahlberg to the UW campus.

Sahlberg’s visit showcased the Finnish program, by turning the local media’s attention to Finland. His visit also showed Seattleites that Finnish is a vital part of the UW community.

What do Students Say about Finnish?

California-native Mike Brown came to the University of Washington to study Finnish. Brown is hoping to go on to a career in the US Foreign Service. He says, “I study Finnish because when I was in high school, I liked a lot of Finnish music, so I decided to study the language at a university level.”

Spokane, WA native Julia Viherlahti says, “I’m studying Finnish because I’m planning on going to conservatory at Sibelius Academy to study music, and at that point I want my Finnish to be at the same level as everyone else there.”

“Finnish Uralic languages have always interested me, and I chose to learn Finnish because I discovered that Finland is an amazing country as well,” says Ian Barrere, an undergraduate student of Finnish.

In its twenty-two years of existence, the UW program has established a strong record of success. It has spread its wings in building a full curriculum of Finnish studies, including a graduate component and a Finnish major. Finnish is a natural fit at UW, which emphasizes global engagement and connectedness. Over 60 languages are offered.

The home of Finnish is the Department of Scandinavian Studies. It offers all the Nordic languages, as well as all three Baltic languages. It is also the largest Scandinavian studies department in the US.

Undergraduate students of Finnish come from many fields, and often make Finnish a part of their program of study. With the help of UW scholarships many students have even pursued their studies in Finland: architects, chemists, oceanographers, folklorists, linguists, and students of Finnish. Many have forged strong relationships with their Finnish colleagues -- relationships that will endure over their working careers.

Finnish-Program students and alumni have gone on to graduate school, law school, careers in the sciences, and high-tech careers at such firms as Microsoft and Google. The program has awarded three PhD’s. A particularly well-known alumna is Lola Rogers, who earned an M.A. in 2005. Rogers’ most recent translations include the English edition of Sofi Oksanen’s Puhdistus (Purge, 2009) and Raija Pulkkinen’s Totta (Truth, 2011). Rogers has become one of the preeminent English-language translators of Finnish.

Through an exchange program with the University of Turku, Finnish students regularly come to the US, and UW students regularly go to Turku. The UW Finnish program has also hosted four Finnish Fulbright exchanges since 2006, as well as numerous teaching interns through the CIMO program.

The program has organized scores of lectures by Finnish leading researchers, like Pasi Sahlberg. Political leaders, e.g. Finland’s three most recent ambassadors, have also called on the Finnish Program and spoken in Seattle. Such exchanges and visits create relationships that are the basis for grass-roots cooperation between the US and Finland. These exchanges also heighten awareness of Finland in Seattle – home to Microsoft, Amazon, Nintendo, Boeing, The Gates Foundation, and other prominent organizations and institutions.

Nourishing the Roots of Finnish Studies

The flourishing of the UW Finnish program is thanks in large part to the local Finnish community. Through community fundraising efforts, and the generous support of Mr. Eero Tetri, Finnish-program supporters have raised over $300,000 to create endowments supporting Finnish.

Unfortunately, budget woes in the State of Washington since 2008 are putting pressure on the UW to cut programs. The Finnish Program remains vulnerable, and needs help.

The Program welcomes new donors to nourish its roots. Gifts can be made online at https://www.washington.edu/giving/make-a-gift?source_typ=5&source=FINNISH

An adequate endowment will ensure the continuity of the visiting Finnish lectureship, the core of the language program. The program’s aim is to double its endowment support by its twenty-fifth anniversary in 2015.

Learn more about the Finnish Program and Pasi Sahlberg’s visit to the UW at http://scandinavian.washington.edu/fields/finnish