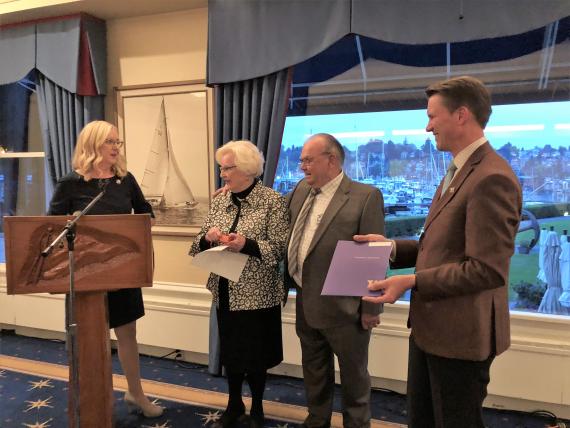 On 27 September 2018, the Georg and Nina Pedersen Endowed Faculty Fund for Danish Studies was established by a signing of documents at the kitchen table of the Pedersen’s home. An initial donation of $50,000 established the new fund. It was the culmination of a conversation that began when Crown Princess Mary of Denmark visited the UW in early May for the the panel discussion on Women’s Economic Empowerment.  Women’s equality is a cause that is near and dear to the heart of Denmark’s crown princess as well as to Nina Pedersen who contributed to the Q and A session that day and also sponsored the reception. Georg and Nina are both Danish immigrants, who have embraced their roles as US citizens and who wish to make a difference for future generations of UW students.  The Pedersens recognize that strong faculty members in Danish at the UW are necessary to continue to attract students to the Danish program and Scandinavian Studies.  The new endowment, which is designed to grow to an endowed professorship and eventually and endowed chair, states that “the primary purpose of this endowed fund shall be to enhance the University’s ability to recruit and retain faculty in the field of Danish language, literature and culture within the Department of Scandinavian Studies.”  Georg and Nina wish to share with UW undergraduate and graduate students the core values of Danish culture that include egalitarianism, education, life-long learning, environmental sustainability, global humanitarianism, social justice, and women's equality; these are values that are embedded in a thriving Danish cultural heritage that is cultivated in cinema, history, language and literature, theater, and song-traditions. The Pedersen Endowed faculty fund was formally announced on October 8th at the Danish Club’s Cultural Evening, along with the news that the endowment had doubled in size to $100,000, with to a second donation from Professor George Takahashi.  Pictured is a recognition ceremony for Georg and Nina Pedersen that evening, along with Professors Marianne Stecher and Andrew Nestingen.