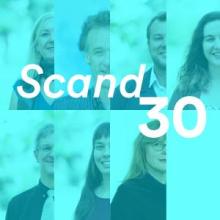 With the 2010s drawing to a close, it seems that all three of the lecturers this autumn had the future on their mind. Professor Marianne Stecher started off the series with a look at Hans Christian Andersen’s forward-thinking fiction in her October lecture, “Hans Christian Andersen - Fairy Tales and Science Fiction.” Professor Stecher walked her audience through how Andersen’s works doubled as commentaries on the changing role of technology in society. Andersen viewed the future with a combination of optimism and apprehension. The same might be said for Professor David D. Battisti, whose November lecture, “Impact of Climate Change on the Trolls of Norway,” examined how rising atmospheric CO2 levels and the resultant change in climate will have serious effects on Scandinavian fauna, though we might be able to mitigate some of the effects if we act fast. Lauren Poyer’s December talk, “Viking Y2K: Ragnarök, Doomsday, and the End of the World” put our understanding of Ragnarök in a broader medieval context, and argued that anxiety about the future, and even the role of human institutions in averting (or creating) disaster, is not a new phenomenon.

Scand30 continues into the Winter 2020 quarter in February. In the dreariest month, just when it feels like winter might go on forever, we could all use a little cozy comfort. Come join us at the National Nordic Museum on Thursday, February 13, to hear Lecturer of Danish Kristian Næsby’s talk, “Money can’t buy you hygge.”